Today we teamed up with our amiga española

Today we were lucky enough to have Spanish brewer Asun Bosch join us in the brewery.

Asun has been brewing beer for “La Jefa: Cerveza Artesana” in Tenerife and wanted to spend a day with Dave to learn all about the brewing process of our English ales.

“La Jefa” is the Spanish feminine form for “boss”, or female boss! The brewery has only been up and running for a couple of months but they have already produced three amazing craft ales… with equally amazing art work! And it gets better, each ale is dedicated to a “La Jefa” that history has kept silently hidden.

1.’Rosalind’ is a light, blonde beer that will fill your taste buds with floral tastes, honey aromas and inspirational overtones. Historically it was almost impossible for female scientists to assert themselves. Education was limited and academic contributions were often dismissed or perhaps worse, misattributed. Rosalind Franklin’s data was used without her permission and her huge contribution to science (unlocking the double helix structure of DNA) was extremely under-acknowledged. Every time you drink a Rosalind you acknowledge “La Jefa” in science!

2. ‘Olive’ is a strong, brown ale that is both sweet and malty with aromas of coconut and vanilla. In her short life, Olive Morris co-founded the Brixton Black Women’s Group and the Organisation of Women of Asian and African Descent (OWAAD). She was also a core member of the British Black Panther Movement. She campaigned for access to education and decent living conditions for Black communities and she fought against state and police repression. Despite dying at a young age, she empowered the people who lived and worked around her. Olive dedicated her life to the struggle for liberation, democracy and socialism- This one is for her!

3. ‘Hedy’ is a tangy, zesty, well-hopped American IPA. It has a high alcohol content and should be savored to receive all of its signals. Hedy Lamarr was a successful American actress, however, with the outbreak of World War II she “did not feel very comfortable, sitting there in Hollywood and making lots of money when things were in such a state”. Instead she turned to inventing and, with help from composer and pianist George Antheil, created a radio guidance system that used a frequency-hopping signal that was immune to interference from enemies. Unfortunately, the US Navy did not adopt her technology until the 1960s, however, the principals of her work are used in Bluetooth technology and versions of modern day Wi-Fi. Cheers to that!


You can visit their website for more info, or if you’re planning a holiday in Tenerife be sure to check out La Jafa and taste their ales (be careful though- they’re strong!)

‘Ging Real Ale Trial’ take a Trip on the Wild Side…

We always enjoy the reviews on YouTube from Stuart and Andrew’s Ging Real Ale Trail. Of course, we love it even more if they are reviewing our ale from Ennerdale Brewery! Take a look here to see the thumbs up they give to our Ennerdale Wild.

It’s fantastic to have such support from Stuart and Andrew – they know their onions (well they know they’re beer!) and it was great to see them picking up on more and more hoppy aromas and subtle flavours as they supped on the Wild.

Well guys, English Pride will be available again for the Six Nations tournaments and for the first time, we are doing a bottled version too! We hope you’ll enjoy this as well and can’t wait to see feedback on YouTube. We hope we’ll be able to welcome you up here to the brewery later this year if you fancy a visit to Wild Ennerdale… Or perhaps you’d like to make up a team in our annual charity barrel run? 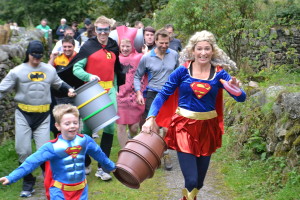 We are very grateful for all the coverage and support that we get from real ale fans. Do keep in touch with us on Facebook and Twitter– we love to hear what you think and always take note of suggestions.

Our beers are on their holidays

Recently spotted in Devon defending the coast, before doing its final duty being enjoyed at a bbq!

As the real ale is refreshing more distant corners of the country (it’s been photographed in Yorkshire, Derbyshire, Devon, and of course closer to home in Lancashire and around the Lake District) we are now building an online shop. This is a really exciting development for the brewery and we hope to have this up and running by the end of September.

There are lots of plans on the go at Ennerdale Brewery with an open day planned to coincide with the annual barrel run, and we’ll let everyone know what’s going on in the next few days!

This is being run in memory of Phil Callery, who was our head brewer who was a big part of our early success.

Here at Ennerdale Brewery we love the fact that people take the time to share and send us their photos from around the country. As a small microbrewery we don’t expect our reach to go much further than Cumbria- but the reach is growing! This comes from those who holiday in the Lake District and fall in love with our cask and bottled ale (and of course locals who take a case of beer with them to enjoy on a sunny evening around the UK!)

This is also a moment to say a big thank you to the increasing number of outlets who are stocking our ale and to those who spread the word through reviews. Your support is very much appreciated!